Tonsils are small glands in the throat, one on each side. They are there to filter and fight infection, especially when you are a young child. The size of the tonsils varies and after the age of about 2 to 3 they become less important in fighting infection and shrink down in size. The wight blood cells learn to fight infection and take over this role. Tonsillitis occurs when the tonsils themselves become infected.

Does your child need them?

The body can still fight infections without the tonsils, and we would only take them out if they are doing more harm than good.

Why take them out?

Do they have to be taken out?

You may want to just wait and see if the tonsil problem gets better by itself over time. Children often grow out of the problem over a year or two.

Antibiotics may help for a while, but frequent doses of antibiotic can cause other problems. A low dose antibiotic for a number of months may help to keep the infections away during an important period such as during examinations but this is no longer recommended by the American Academy of Paediatrics.

There is no evidence that alternative treatments like homeopathy and cranial osteopathy are helpful for tonsil problems.

You may change your mind about the operation at any time, and signing the consent form does not mean that your child has to have the operation. If you would like a second opinion about the treatment please ask your G.P. to arrange this for you.

Arrange for a couple of weeks off school.

Make sure that you have plenty of simple painkillers like paracetomol at home for after the operation. Do not give your child aspirin.

Let us know if your child has a sore throat or infection in the week before surgery because we may postpone the operation for a few weeks.

It is very important to let us know if your child has any bruising or bleeding problems, or if this type of problem runs in the family.

Admission to hospital is on the day of the operation. A lot of the operations are done as day cases, but this depends on a number of factors like the time of day the operation is done and how far away you live. If your child has Sleep disordered breathing or OSA then they will usually be kept overnight for observation.

On admission your child will be seen and assessed by nursing staff, the anaesthetist and by the surgeon performing the operation. If you child has a raised temperature or is unwell on admission we will cancel and arrange another admission date in a few weeks.

How is the operation done?

Under a full general anaesthetic in the operating theatre. You will be able to go with your child into the anaesthetic room in the operating theatre area and stay with them until the general anaesthetic has been given. We then take them into the main theatre for the operation, which takes about 20 minutes or so. Your child then goes through to the recovery area and they stay there until they are wide enough awake from the anaesthetic. You would them be contacted to come over to the recovery area to be with them again. You will then both return to the ward area for further observations which will continue regularly for the next few hours.

What are the possible complications from the surgery?

The most serious problem is bleeding. About 1 in every 200 children having a tonsillectomy will have some bleeding in the first few hours after the surgery and will need to go back to the operating theatre for this to be dealt with. About 5 in every 100 children will have some bleeding after going home (most towards the end of the first week and always by 2 weeks) and 1 in 100 will have to go back to theatre for the bleeding spot to be cauterized.

Nausea and vomiting is quite common in the first few hours but usually settles quite quickly.

The throat will be sore after the operation, but painkillers will have been given during the operation and will continue on return to the ward. Some children feel sick and vomit soon after coming back to the ward. The nursing staff will continue with the usual observations of pulse and temperature. After a couple of hours they will encourage your child to start drinking, and then to eat.

You need to remain on the ward for a minimum of 6 hours after the operation. If your child is well after this time, is eating and drinking and the pulse and temperature are normal you may be able to take them home. This will depend on the reason for the operation, how far away you live from the hospital, your transport situation, and the time of day. The nursing staff would discuss this with you on the day.

When you take your child home it is very important to give them regular painkillers to keep on top of the pain. Regular eating and drinking is also important. With older children chewing gum may be helpful. Try to avoid dry or smoky atmospheres and other children or adults who may have coughs or colds.

The pain may peak towards the end of the first week after the operation, and then starts to improve in the second week. The throat would normally be fully healed by about 2 weeks.

The nerves to the throat also go to the middle ear so your child may complain of earache after the operation. It does not usually mean that they have an ear infection.

If you look into your child’s throat it will look yellow / white on either side where the tonsils were taken out, with some reddening of the tissues around this area. You may see little threads which are the ties we use to stop the bleeding. These threads will fall off by themselves.

Some children get a throat infection after the surgery, usually if they have not been eating properly. If this happens they will be feverish and have bad breath with increasing pain which is difficult to control with the simple painkillers you have been giving. If this happens you should call your G.P. or the hospital for advice.

If your child has any bleeding at all from the throat after you take them home you should  take your child to the Emergency Department at the hospital without delay or call an Ambulance.

Where else can I find information about tonsillectomy?

The ENT UK website also has a short information leaflet on tonsillectomy in children:

(I would like to thank Mr G R Ford  from Dorchester Hospital, England, for his help with the preparation of these leaflets) 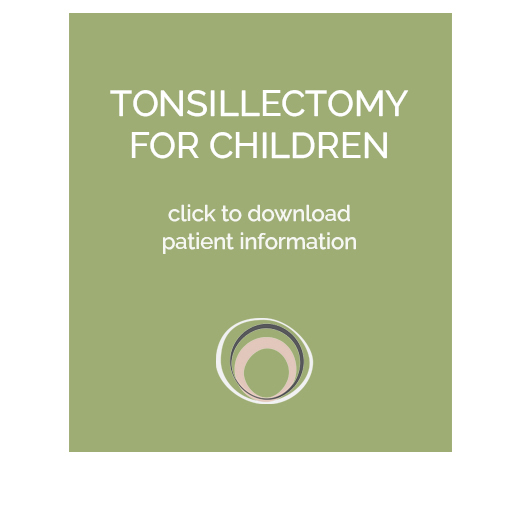