What do the tonsils do?

The tonsils are part of a ring of tissue at the back of the throat (including the adenoids and the back of the tongue) that is involved in the processing of infective particles (bacteria and viruses) that enter the nose and mouth. This tissue helps the body to combat these potential infections.

The tonsils are large in early childhood and then gradually decrease in size. They may remain large in adolescents and adults if they have been infected regularly.

Removal of the tonsils does not appear to affect the body’s ability to combat infection as the white blood cells (immune system) take over this function from about the age of 2 to 3 years old.

Why is tonsillectomy performed?

There are many indications for a tonsillectomy, however the usual reason is repeated attacks of tonsillitis that have been treated by your G.P. with antibiotics. There is no hard and fast rule for when to perform a tonsillectomy, it all depends on the number and severity of attacks. We would usually need evidence of 6 or more attacks in a year or 5 attacks a year for 2 consecutive years, or 3 attacks a year for 3 consecutive years.

Some patients have a more persistent infection of the tonsils – a chronic tonsillitis.

Occasionally, the tonsils are removed for when they collect whiteish debris in the crypts (tonsil stone/ tonsoliths) and cause bad breath and soreness.

Infection in the space next to the tonsil can lead to an abscess –  a quinsy. If this has occurred we would usually recommend a Tonsillectomy in order to stop this from happening again.

If there is a history of Sleep disordered breathing or Obstructive sleep Apnoea (OSA) and the tonsils are enlarged, then they may be removed to help open up the airway and help to reduce the problem.

What does the operation involve?

The day of the operation:

An attack of tonsillitis in the 2 weeks before the date of surgery may make a postoperative infection more likely – you should ring the admissions office to inform them. The admission may be cancelled and another date for admission given for a few weeks later. Admission is almost always on the day of surgery. The nurses will complete some routine paperwork and tests. You will be asked to change into a gown ready for theatre. The anaesthetist will come to see you and discuss the anaesthetic side of things. A member of the ENT team will also see you before your operation

Normally these procedures are performed under general anaesthetic.

The operation takes between 15-30 minutes in all. The tonsils are removed and any bleeding controlled with ties or electrical cautery.

Arrange for a couple of weeks off work.

Check that you have a friend or relative who can take you home after the operation.

You must not drive for at least 24 hours after a general anaesthetic.

Make sure that you have a supply of simple painkillers at home.

After a short time in the recovery area, you will be taken back to the ward. You will be encouraged to drink and then eat as soon as the anaesthetic has worn off. You will be given regular painkillers to make the throat more comfortable and to make swallowing easier.

Your discharge from hospital:

The following day you will be reviewed on the morning ward round, and as long as you are is eating normally and not feverish or nauseated you will probably be discharged home about lunchtime on the day after the operation. You will need to arrange for someone to pick you up to take you home. Depending on how fit and active you are before your operation, you may need to arrange for someone to stay with you for a few days.

What should I do when I leave the hospital?

Following a general anaesthetic, you may find that you need more rest than before for a day or two. This is normal. You may want to take it easy for a few days otherwise they should be able to get back to normal activities as soon as possible.

It is important to eat and drink normally. If it is difficult to eat due to pain, try taking painkillers before mealtimes.

It is important to eat normal rough foods regularly for a number of reasons. The process of chewing relaxes the muscles of the throat and reduces spasm which results in decreased pain. If you find this difficult, chewing gum before meals helps to get the process going as does taking your painkillers half an hour before meals. Swallowing normal rough food also helps to keep the tonsil area clean by reducing the “slough” or scab which builds upon the raw tonsil bed. This speeds up the healing and reduces the chance of post-operative infection and bleeding. So eating normally is the most important thing to do post-operatively and you will not be discharged from hospital until you are.

You should not drive for at least 24 hours following your operation, depending on your progress. You can then drive when you are able to perform an emergency stop safely.

The soreness in the throat is worse in the first few days, and should probably be improving by the end of a week. The nerve from the throat is connected to the nerve from the middle ear, so earache is very common after a tonsillectomy and should be helped with painkillers. We would recommend that you take regular painkillers for the first week and then as needed the week after. It is very important that you eat and drink as normal as this decreases the risk of infection. Brushing teeth and chewing sugar-free gum are to be encouraged for the same reason.

You will be given regular paracetamol (or panadeine forte) and Ibuprofen in most cases unless there are specific reasons why you cannot take these medications. If that is the case, you will be provided with a suitable alternative. You will also be given Endone to take at night or if the pain is really severe.

You will need 2 weeks off work after the operation, to allow the raw area in the back of the throat to heal. You should keep away from dry and smokey atmospheres and other people who may have coughs and colds. Do not smoke.

Are there any risks involved in this operation?

Although modern surgery and anaesthetics are considered to be safe, all medical procedures carry some risks. The risks increase if you are unhealthy or have other major medical problems, or are diabetic or asthmatic. The surgeon will discuss all these risks with you.

The main risks associated with the operation are:

Are there any alternatives to this operation?

In cases of recurrent or chronic tonsillitis, a long-term low dose course of antibiotics may help, but the chances of improvement are not great. There is also a possibility that the infections will just gradually settle on their own if the infections have not been going on for very long. In that situation, it may have been suggested in the E.N.T. clinic that there should be a further period of waiting before recommending surgery.

If you would like a second opinion about the proposed surgery please ask your G.P or Surgeon to arrange this.

What could happen if I don’t have the operation?

If you decide not to have surgery your symptoms may persist or worsen. 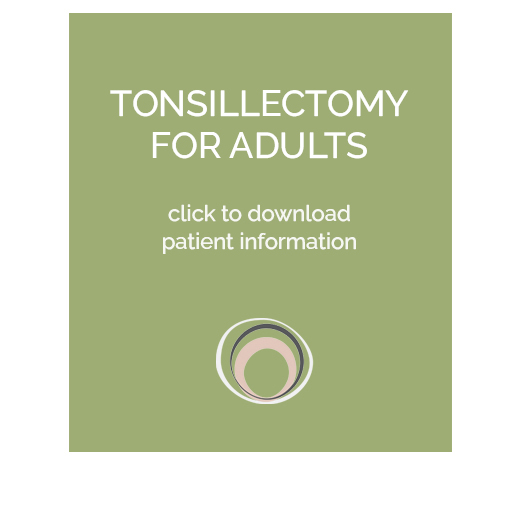