What does the nasal septum do?

The nasal septum is a vertical sheet of tissue that divides the nasal cavity into two halves. At the front of the nose, it is made up of a central flat sheet of cartilage covered in a layer of the lining tissue of the nose on both sides. Further back in the nose the central sheet is made of a thin sheet of bone instead of cartilage. At the very back of the nose, the nasal septum ends and there is a single cavity leading down to the throat. As well as dividing the nasal cavity into two halves, the front piece of cartilage shapes and supports the tip of the lower half of the nose.

Turbinate’s are structures on the sidewall of the nose. There are 3 in each nostril (inferior, middle and superior turbinate’s). They are composed of a thin boney strut that sticks out into the airway and it is covered by mucus membrane on both sides. The mucus membrane has a rich blood supply. Their function is to moisten and warm the air that we breathe in through the nostrils before it reaches the lungs. The turbinate’s swell or shrink in response to nerve impulses. The Inferior turbinate’s are important in nasal blockage.

Why is a Septoplasty performed?

The usual reason for surgery on the septum (Septoplasty) is because the nasal septum is bent to one side of the nose causing a blockage. The bend is often referred to as a “spur”. The septum may just grow this way with age, or the bend may result from a nasal injury or broken nose. A Septoplasty involves removing this bent bit of the septum and thereby improving the airway and breathing.

Alternatively, the operation will be recommended when some other surgery is being performed on the nose, e.g. in sinus surgery to allow access to the sinuses.

A Septoplasty is rarely performed in children because of the risk to the future growth of the nose.

Why is a Turbinectomy performed?

The inferior turbinate on the opposite side to a septal deviation (spur) swells excessively and will, therefore, cause blockage of that side once the Septum is put back into the middle. Therefore it becomes necessary to reduce the size of the turbinate’s (Turbinectomy). They may also swell in response to allergies and infection/inflammation causing a nasal blockage.

There are a number of techniques available to your surgeon to reduce the size of the turbinate’s. These include submucosa diathermy; Out fracture; Partial or submucosa resection; or a combination of these techniques.

What does the operation involve?

Arrange for a couple of weeks off work.

Check that you have a friend or relative who can take you home after the operation.

You must not drive for at least 24 hours after a general anaesthetic.

Make sure that you have a supply of simple painkillers at home. 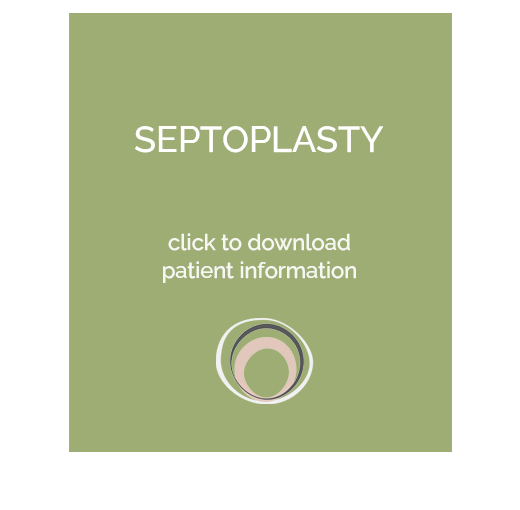